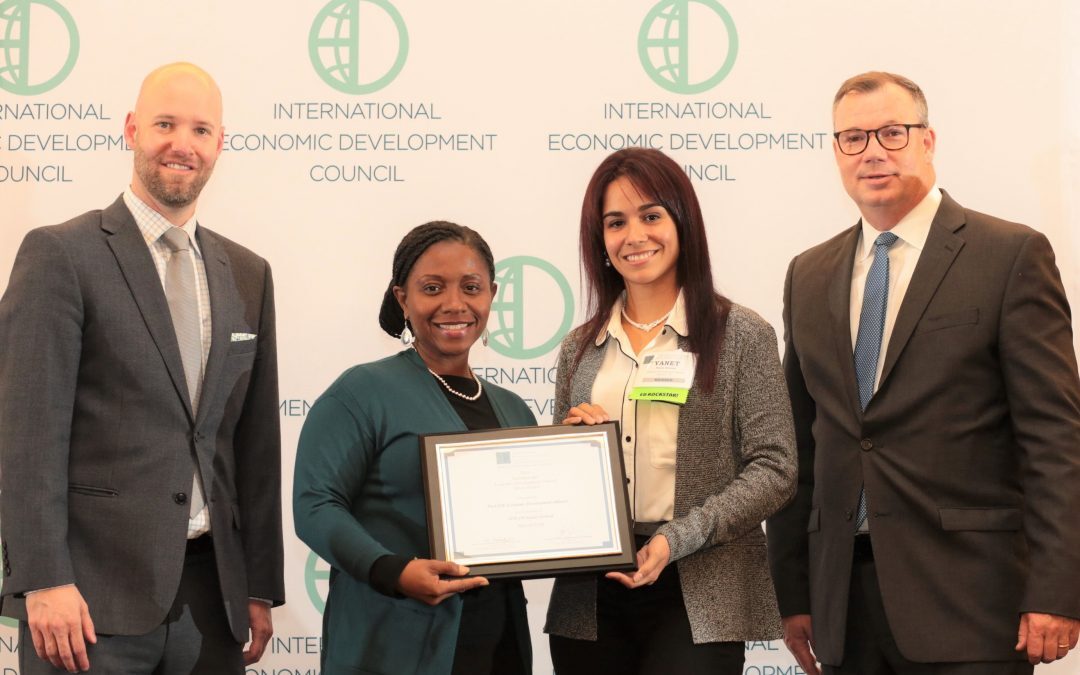 INDIANAPOLIS, IN – TheLINK Economic Development Alliance won a silver award for its eSTEAM Sumter Festival, a project in the category of special event of the International Economic Development Council (IEDC). The honor was presented at an awards ceremony on Tuesday, October 15 during the IEDC Annual Conference, which was held October 13 – October 16, in Indianapolis, IN.

“This award is a big win for our community as it acknowledges what can be accomplished when we work together collaboratively. The eSTEAM Sumter Festival recognition from IEDC showcases that we’re a world-class region with world-class people capable of meeting the needs of both new and expanding business and industry. This festival highlights many of our competitive advantages”, said Erika Williams with TheLINK Economic Development Alliance.

IEDC’s Excellence in Economic Development Awards recognize the world’s best economic development programs and partnerships, marketing materials, and the year’s most influential leaders. 34 award categories honor organizations and individuals for their efforts in creating positive change in urban, suburban, and rural communities. Awards are judged by a diverse panel of economic and community developers from around the world, following a nomination process held earlier this year. IEDC received over 400 submissions from 12 countries.

Lee and Sumter counties joined together in 2014 forming TheLINK, the regional economic development organization charged with fostering job creation and increased earnings. Strengthening our talent pipeline is critical to this process as we showcase the region’s assets for business recruitment and business success.

“The recipients of IEDC’s Excellence in Economic Development awards represent the very best of economic development and exemplify the ingenuity, integrity, and leadership that our profession strives for each and every day”, said 2019 IEDC Board Chair, Tracye McDaniel. “We’re honored to recognize more than 100 communities for their excellent work, which forges new opportunities for our profession. We look forward to even greater participation from economic developers across the globe in the 2020 awards program.”
About the International Economic Development Council

The International Economic Development Council (IEDC) is a non-profit, non-partisan membership organization serving economic developers. With more than 5,000 members, IEDC is the largest organization of its kind. Economic developers promote economic well-being and quality of life for their communities, by creating, retaining and expanding jobs that facilitate growth, enhance wealth and provide a stable tax base. From public to private, rural to urban and local to international, IEDC’s members are engaged in the full range of economic development experience. Given the breadth of economic development work, our members are employed in a wide variety of settings including local, state, provincial and federal governments, public-private partnerships, chambers of commerce, universities and a variety of other institutions. When we succeed, our members create high-quality jobs, develop vibrant communities, and improve the quality of life in their regions. Learn more at iedconline.org.